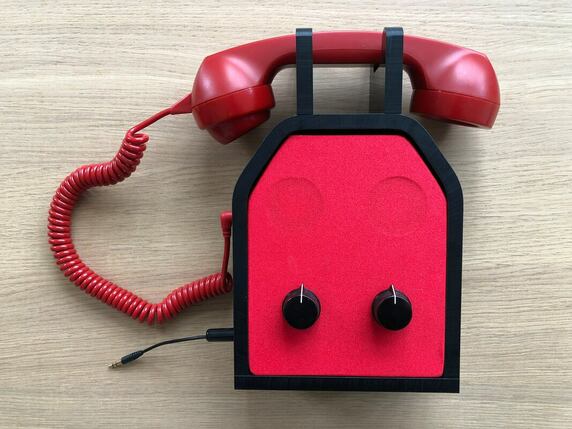 This prop is not manufactured by Wilde Devices but made to special order for the danish mentalist Niels Krøjgaard by Søren Harbo from Labco Magic. It is offered for sale here as a courtesy to Niels.

Prop description:
A beautiful stylized telephone with loudspeakers build in, so the audience can hear the conversation between the mentalist and another person clearly. The telephone is made in glossy plastic and has an unique exclusivity to it. Use a smartphone with a mini jack plug to operate.

Usage:
The prop is aimed at the professional mentalist who can see the potential in calling someone and performing a mentalist act over the phone. A similar prop has been featured by Derren Brown in his show "An evening of wonders" (watch the video below - routine begins around 17.30 into the show). This prop does not come with a routine.
Disclaimer: Video is meant as inspiration. Not as a routine to be performed